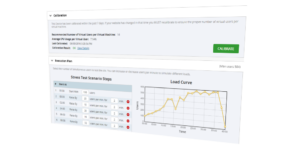 LoadView is a new load and stress testing product capable of performing load tests that scale to thousands of simultaneous users.  The complete details of the new LoadView product are currently featured on www.loadview-testing.com.  LoadView is a powerful cloud-based load testing tool that can run in real browsers as well as headless http tasks to load test your website or web application.  Over the course of a single load test you can generate millions of site visits, simulating peak load times on your website.  All test results are recorded, aggregated and available in real-time online graphs and detailed reports to help track the response time of your website as the number of simultaneous users increases.

There are two main types of tests you can perform with LoadView, load testing and stress testing.

A load test is typically performed to simulate different levels of simultaneous visitors on a website.  The number of users simulated often ranges from daily averages up to peak amounts seen during busy sales or events. This type of test helps verify that the infrastructure is capable of handling both an average number of users as well as projected peak levels of traffic without any major slowdowns or other problems that might impact the user experience on the website.

The other extreme for load testing goes even beyond current expected peak traffic levels to truly test the limits of the website infrastructure.  Stress testing continues to increase the number of simultaneous users until the performance of the website is negatively affected, possibly even until failures are encountered.  The “hug of death” as some internet users call an accidental stress test can theoretically hit a website at any time due to a number of causes such as content going viral.  To be prepared for such a sudden increase in load on your web application, you should preemptively run stress tests so that you know how many simultaneous users your site can handle before it buckles under the pressure.

Here is a breakdown of the different task types available:

HTTP/S tasks can be as simple as sending GET or POST requests to the web server and waiting for the response, or they be more complex to include downloading every element on the page.  There are also options to only download certain types of elements such as images or scripts.

HTTP tasks are unique in that you can add multiple tasks to a load test to be run in a sequence.  You can therefore also pass variables from one task to the next, such as session cookies.

The Web Page Monitoring option (AKA BrowserView) consists of a single task that records the page load metrics for all elements associated with a single webpage using a real web browser.  To setup a single page monitor in LoadView, specify the browser and the web page url as well as any keywords or advanced filtering actions.  Advanced filtering actions include the Network Element Filter which gives you the ability to exclude specific components from the load test.  For example, if you wish to exclude all 3rd party elements from your test you can specify the domain of each third party host to ignore with a wildcard to ignore all content from that domain.  Conversely, you could set a filter to only download elements from the root domain, which will ignore all elements that load from a third party domain. This way you don’t have to worry about exceeding bandwidth limits or crashing a particular 3rd party connection during an intense load test.

Also known as UserView tasks, these scripts are recorded using the EveryStep script recording tool.  One major difference between LoadView and most other load testing tools is the ability to run scripted user interactions using a real browser.  While you can also run a basic headless set of requests, the real power of LoadView is in recording dynamic scripts with EveryStep and then performing the test from within actual browsers.  There are over 40 different browsers you can chose to record a script in, including Google Chrome, Microsoft Internet Explorer, Android iOS and blackberry mobile devices and more.

Website monitoring in real browsers means you will be generating real load through interaction with Rich Internet Applications (RIAs) like JavaScript, AJAX, JQuery, AngularJS, HTML5, Silverlight, java applets and more. Headless browsers will request the download of elements but they cannot replicate additional calls made by such interactive elements on a page.  This then has the capability of creating additional resource calls and database interactions, thus creating a more realistic simulation of actual user load on the web application.

Verifying that a page is served up and rendered properly can be tricky using a simple headless browser to request a web page.  With the scripts created using EveryStep you can specify keywords that you expect to always show up on the page, and if they do not, the individual testing session is considered to have failed.  You can also set a session timeout, so if any of the sessions in the load test take longer than the specified period, the sessions will also be considered a failure.  All failures are logged and can be identified on a performance graph.  You can also drill down into the details of individual sessions in a test to see exactly what went wrong- what keywords were not found or what timeout thresholds were exceeded.

While performing a load test you can watch the results in real-time as each session hits the server and records individual page and session response times.  If you notice spikes in load times or a surge in errors detected you can select individual sessions to drill down and view element by element response times and errors in order to identify problematic areas.  Once a load test is complete you can also download a file containing all test results for further analysis.  Using these results, you should be able to pinpoint either peak numbers of simultaneous users that cause problems with your website or individual elements that need to be optimize in order to handle a more significant user load.  Such optimizations might be as simple as loading a smaller image file size, minifying code or moving files to a dedicated Content Distribution Network (CDN).  For additional information on how LoadView load and stress testing with Dotcom-Monitor, check out the official LoadView website, and for additional hints and tips on how to optimize your website to handle the highest capacity during load testing, read this blog post on load testing.